It is the famous Spanish architect Rafael Moneo (class 1937), Pritzker Prize in 1996, the winner of the sixth edition of the International Prize of Sacred Architecture, addressed to the new religious buildings of Christian worship made all over the world. its church of Iesu, in San Sebastian (Spain), with clean and compact shapes, alternating full and empty, has conquered the jury, which unanimously decided to award it the first prize.

In second place was the new Church of the parish of Kadon, in Don Duong, in the province of Lam Dong, in Vietnam, made in 2014 by the architects Thu Huong Thi Vu and Tuan Dung Nguyen, with simple materials like wood and Iron, which enhance the relationship with nature and the opening of the spaces outwards. 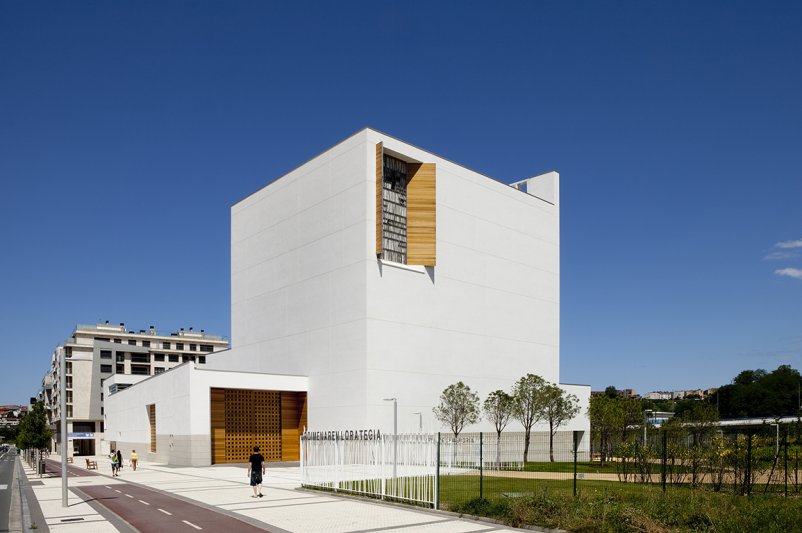 the new St. Trinitatis Church in the city of Leipzig (Germany) – the largest Catholic church in the former GDR – of the German architectural firm Schulz und Schulz obtained the third prize. The architects worked on the relationship with the history and the place, choosing a material like porphyry, the same red stone, porous but very hard, with which are built the most significant monuments of the city. Inspired by the principles of energy sustainability, the church is equipped with a geothermal system, designed by scientists from the Dresden Polytechnic.

Not only "Archi-Star" So, and prizes to the big names of the universally known architecture, but also a commitment to enhance the work of less well-known professionals but equally excellent in their work: next to the first three classified, the jury has Chosen to confer a particular recognition to two other works.

The special mentions go to the St. John the Baptist Chapel, made of stone and Wood in Berlin's Johannisthal district by the German architecture studio Brückner & Brückner, and the simple and austere Saint John Baptist Chapel, Conceived, like a scalene triangle that fits perfectly in the landscape, by the Spanish architect Alejandro Beautell, in Tenerife, in the Canary Islands.

José Rafael Moneo Vallés, better known as Rafael Moneo, was born in 1937 in Tudela, Navarre, and studied in Madrid where he lives and works.
Director for many years of the most famous school of architecture in the United States, the Graduate School of Design at Harvard, taught architecture in Barcelona, Lausanne, New York, Princeton, Harvard and Madrid, and is the only Spanish architect to have won the prize Pritzker.
Moneo has built distinctive and recognizable architectures, in the name of clarity and precision. Its buildings possess the compactness that the architect declares as a keystone for a new modernity that represents the future of architecture.
His works interact with the identity of the place, amplify it and interpret it.

It happens with the great interventions like the Kursaal Concert Hall of San Sebastián or as the remarkable extension of the Prado in Madrid, reflecting the attention of Moneo for a historical context so complex, fascinating and delicate – managing to fit in total harmony even though With a completely different intervention-.
And it happens with smaller but symbolic interventions, like the town hall of Murcia, and even when it comes to hotels, like the Hyatt of Berlin, where the architect manages to cut out an identity space in the discussed context of Potsdamer Platz.

His most important works include: The Museum of Roman Art in Mérida, the Atocha station in Madrid, the Seville airport, the Stockholm Museum of Modern Art, the Lady of Angels Cathedral in Los Angeles, and the Gregorio Marañón Children's Hospital in Madrid.

In balance between emotion and rigor, the Church of Iesu (inaugurated in 2011) rises in one of the most recent districts of the Basque city, that of Riberas de Loiola, where the religious building, together with the adjoining garden of memory, is to constitute a new Landmark. The architecture, which the same Moneo defines as "generous in spaces and very modest in the materials" stands out (both externally and internally) for the abstract and minimalist white of the walls, element that recalls the dominant color of the flowers of the Nearby park and especially the important rationalist constructions in San Sebastián, such as the Real Club Nàutico and the building "La Equitativa". The complex consists of three elements: the church itself, located within a cubic volume and facing east; A "a Elle" body, which houses several rooms including the Parish centre; A wall that closes the patio-garden located between the two buildings and that filters the passage from the open space of the road to the mystical temple.

The nave of the church has a cross-shaped plant, carved into a larger quadrilateral; In the spaces that complete the figure are placed, to the left, the sacristy and the Baptistry, and, to the right, the Chapel of the Blessed Sacrament and that of reconciliation; The cruciform structure of tradition is actualized by an asymmetrical design, which gives way to "reflect the tensions of today's world", according to the architect himself, and a reference to the Basque sculptor Eduardo Chillida and his cross of Peace, housed in the Cathedral of San Sebastian.

A fundamental role is played by the natural light which, entering inside in different ways, manages to connote every space in a peculiar way; It emerges in particular the zenith illumination of the main nave, due to the openings in the cover that highlight the cruciform plant and able to immediately evoke the gospel message and to convey the faithful in a mystical dimension. Noteworthy is also the large window designed by the same Moneo and made of alabaster and glass inserts representing a cross, a Sole and two moons in separate stages.